Today we are looking at three completely different bow designs longbow vs recurve vs compound. They may differ significantly, but they use the same principles in shooting an arrow, and that is storing energy in limbs that is transferred to the arrow by use of a string when we shoot the bow. Before we start comparing, let us take a quick look at the history of these bows.

Longbow Vs. Recurve vs. Compound: A Quick History

Starting with the Longbow. How long has this bow been used?

Surprisingly, a form of Longbow can be found as far back as 3300BC. The main reason this bow has been around for over 5000 years is due to its simplicity. A long piece of wood that is bent by a string connecting the two ends. It has been used by many civilizations and many armies to devastating effect.

The French were using crossbows at this time; however, the Longbow was more accurate and could fire more arrows in a given time. Even with this showing how good a bow was, its days were numbered as a weapon of war and by the 1580’s it was becoming obsolete due to the use of the first “handguns”.

Now, let’s take a look at the Recurve bow. How long has this type of bow been in use?

It’s amazing to find out, but the Recurve bow design has been around since 2000BC and was made from composite materials (metal, wood, plant material). As they required more materials to produce and greater knowledge in design, only certain countries used these bows.

They were “snappier” and quicker than a longbow and usually shorter, making it easier to move around with it. This made it good for hunting and use over shorter distances where it was quicker and more accurate than the Longbow.

We now move forward in time to what we would call the modern world, and 1966. Holless Wilbur Allen of North Kansas City, Missouri, developed the first Compound bow. This design of bow was granted a patent in 1969.

The Compound bow has become increasingly popular and allows the archer to be incredibly accurate while shooting higher poundage bows. This is not only good for target shooting but also for hunting. It is the most popular bow in the United States.

Bows, themselves work on the same principle. However, their design characteristics differ greatly. Longbows are normally made from a single piece of wood. This wood may be, Yew, Ash, Elm, and some other woods can be used. This wood cannot be found everywhere, and this is one of the reasons why different bow designs were developed all around the world.

Longbows are made between 6’2” and 6’11” (1.87M and 2.11M). These bows were best for shooting in open areas and provide a smooth draw. Draw weight also varies greatly for longbows.

The thickness of the bow’s handle and limbs will dictate the draw weight of the bow. For a hunting Longbow, the draw weight is usually around 40-50Lbs. A War bow/Longbow can be from 80Lbs to 150Lbs with a few that reach 200Lbs. If you have ever drawn a bow before you will know what it would take to try and draw a bow like that.

The design of the recurve bow differs from the Longbow by being a “Reflex” design. This means the limb tips point away from the archer when unstrung. Why is this the case? It is designed this way to allow for more energy to be stored in the limbs when drawn. It also means the bow needs to be laminated or have composite materials due to the forces involved.

Even today when we look at an Olympic recurve bow, we see the use of reflex limbs that are made from a variety of materials (Composite). We find wood (usually Maple or Bamboo), fiberglass and resin, foam, and now carbon composites.

The risers or handles on recurve bow can be made in different materials as well. Wood, metal, and carbon are the most common. The ability to have a “takedown” recurve bow, as well as a single-piece bow is a design feature only seen with recurve bows allowing easy transport and storage of the bow.

Compound bows use a design where someone thought completely outside the box. They have taken the theory of using the advantage of pulley systems and put that onto a bow. This allows the archer to hold a high poundage draw weight at a fraction of the draw weight you would get with a Recurve or Longbow.

Compound Vs Recurve vs longbow: Drawing The Bows

Comparing how the bows draw will show us how the bows shoot. If we have three bows, one of each, all with a 50Lbs draw weight what would we feel when the bow is shot?

To start with the Longbow and the Recurve bow would be similar. As you draw both these bows the holding weight increases and maxes out when the archers draw length is reached. With a compound bow, the draw forces are changed due to the pulley arrangement and this can be further manipulated by the shape and size of the pulley wheels. The diagram below shows the basic draw force curves for each bow.

As you can see the compound needs more force, to begin with, but then it drops away allowing the archer to hold at full draw and hold only a fraction of the weight making aiming easier.

Another thing to remember with draw weight is the archer’s draw length. The draw weight of bows is usually measured at a length of 28”. If an archer has a greater or less draw length than 28”, the draw weight for a given poundage of bow will change.

This is a great way of comparing these bows. Again, if we have all 3 bows at the same poundage will they shoot an arrow at the same speed and have the same distance. The simple answer to this is NO. But why is this? It comes down to how efficiently the bow stores energy in its limbs and passes that energy to the arrow.

To put it simply due to the shape difference between the longbow and Recurve bow, the recurve bow can store more energy in its limbs compared to a longbow. Therefore, the recurve will shoot an arrow faster and have more distance for the same draw weight.

The Compound is another step up in efficiency. More energy and greater efficiency in passing it to the arrows mean even faster arrow flight and greater range.

The above diagram shows how the speed of the arrow will affect the distance it will travel.

There is no record distance for a Compound bow, but the longest Compound shot to hit a target is 283.4M (930 feet), but people have shot a compound bow, not at a target but just for distance, well over 500M (1640 Feet).

Let us compare how accurate these bows are. Now a lot of the time, accuracy comes down to the archer, their technique, and weather conditions. Apart from these items, let us look at what else is bow-specific that will affect our accuracy.

Starting with the longbow. First, there is no shelf on the handle, so the arrow needs to be shot “around” it. This for a start will mean accuracy will be reduced.

Next, we need to look at the arrows. Longbows normally only shoot with wooden arrows. This makes trying to tune the bow extremely difficult. Having no arrow rest, apart from the archers’ own hand also means that getting consistency in every shot does not allow for great accuracy.

How the bow is made will decide how well it shoots and how accurate it will be. If one limb is thicker than the other even by a small amount, the bow will shoot off center.

Having no sight will make the bow inherently difficult to aim as well. Finally, the weather will affect the longbow. Heat, cold and damp will affect the bow and how it draws and stores energy. It may make it weaker reducing its draw weight and always giving the possibility of breakage.

Recurve bows are faster than longbows of the same draw weight. They also have an arrow shelf and rest. Modern recurves have other items like Plunger Buttons, Clickers, Stabilisers, and Dampers that allow for more accuracy, consistency and on some bows, sights are used.

This makes the Recurve bow very accurate if the archer can cope with the draw weight of the bow.

Compound bows take the crown as the most accurate among the bows. This is due to the ability to hold the bow at full draw for longer and at a greatly reduced draw weight.

If an 80Lb draw weight compound bow has a 90% let-off, then at full draw the archer would be holding 8lbs at full draw. The use of sights that have magnified lenses also helps with aiming and having a peep sight in the string again promotes and helps accuracy.

Who Shoots What, and Why?

So, we have compared these bows and found major differences between them. So why would you shoot a Longbow if a Recurve is better, and why does everyone not shoot the Compound? It all comes down to what you, as an archer, want to get out of archery.

Now, this is a generalization, but those that shoot Longbow, want to be able to shoot a bow with no aids to help them. They want the pure feel that our ancestors had. As a friend once said to me, “they want to keep it real”. They want to prove to themselves they can shoot and hit a target with just their skill.

Many Longbow shooters also like to conduct re-enactment, keeping things as authentic as possible, feeling like Robin Hood did. Another archer friend who shoots a longbow also said that if they missed the target, who cares, they are shooting a longbow.

I thought this was a great mindset as a lot of recurve and compound shooters would be berating themselves if they missed the target.

Here they shoot modern “take down” bows but with no sights and minimal weight added to the bow for stabilization. The last group is those that use everything they can to make them shoot as accurate as possible but still shoot a design of bow that has been around for thousands of years. These people are what you see at the Olympics or at Competitions in most countries.

Finally, the Compound archers. Both Longbow and Recurve archers call this “Turning to the Darkside”. These archers want the best accuracy and use the most modern form of equipment. These archers are normally target archers or those that hunt. Compound bows are great for hunting as they are relatively short in length but are very fast.

Recurve Vs Compound Vs Longbow Which is Best?

This is a very subjective question. You ask any archer that shoots a certain style of bow, and you will get different answers.

If you want the “pure feeling” of archery, not worried about how accurate you are then the Longbow is a great way to go.

If you are an aspiring Olympian or want to be accurate or even just use a bow that is a bit faster and is a takedown bow, easier to move around, then the Recurve is the bow you want to try.

However, if you hunt, or target shoot, want the most up-to-date technology, the Compound bows are for you.

Cost varies as well. You can pick up cheap bows of all three types, or you can buy expensive ones. Anything from $200 to $4000+. The costs can be great but one thing to remember, if you buy a bow it will last for a long time and give you years of enjoyment no matter which type you go for. 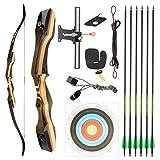